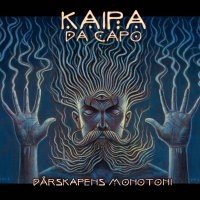 1. Hello Roine! The KAIPA DA CAPO tour starts in about two weeks. I guess you are well prepared and excited?

ROINE: Yes we are pretty well prepared - happy to play both some new songs from “Dårskapens Monotoni” and some older songs from way back - the 3 first DECCA albums.  Classic stuff and it is almost scary how well we remember them - as if it was yesterday - but some of these songs have not been played live for almost 40 years. Everything gel, everything starts sounding organic - and next week we go into production rehearsals. - Surely gonna post fun stuff from that on Facebook etc.

2. I read that your keyboard player Max Lorentz can't join the first dates, because of an injury. Can you tell us more about it, and also about the replacement?

ROINE: Yes, Max was attacked by a drunk madman at a show in Stockholm in December. He broke his foot  - injured severely. We have to  carry on and therefore brought in Lalle Larsson (of Karmakanic)  who is a fabulous musician and  insanely technical player - concert pianist , jazz man etc.  - It will be fun see how we integrate him in the Kaipa music.  We will give him some solo spots too - I’m sure all will be fabulous  but maybe slightly different.

3. In our last interview you made me curious about your 1953 Les Paul. After I researched the value of those old Les Paul guitars I understood why you don't take it on tour with you. Then I wondered where we can hear this guitar. Is the first lead guitar on "Dårskapens Monotoni" played on that one?

ROINE:  Some of the lead guitars on “Dårskapens Monotoni “ is indeed the 1953 Les Paul Gold Top - I cannot remember exactly  what - but I’m sure the solo in “Tonerna”  and most likely some of the  guitars in   “Det Tysta Guldet” and “Dårskapens Monotoni”   - Also used it frequently in some Flower Kings material, Transatlantic and  definitely on major parts on my blues album - Wallstreet Voodoo from 2004.
On this coming tour I will be playing a Fender Telecaster thinline, A  Gibson ES 335  and a Fender Stratocaster - all with True Temperament fretboards. They are all fantastic guitars set up by the guys at TT.

4. How come you decided to sing in Swedish on "Dårskapens Monotoni”?

ROINE: We just wanted it do as much different to many  other  modern acts of prog - like  Steven Wilson, Neal Morse, Haken, Dream Theater, Pain of Salvation and of course The Flower Kings -  we all sing in English (some for obvious reasons)  - but we wanted Kaipa Dacapo to stand out and be different.

5. Will you play the entire new album on the concerts? Any chance I will get to hear the old KAIPA track "Förlorad I Istanbul" on tour?

ROINE: We will play about half of the new album - definitely  "Dårskapens Monotoni” , “Tonerna”, “Det Tysta Guldet”  and many from the old days - like “Skenet Bedrar”, Korståg” , “Inget Nytt Under Solen” , "Sist på Plan”, "Total Förvirring”, “Ankaret “  etc.
It will be a very massive show  even if some venues are  smaller -  for those who like symphonic rock  it’ll be a feast - with a folk touch.
You heard it. Come and see KAIPA DA CAPO in Sweden, Germany, Denmark and the Netherlands on these dates: