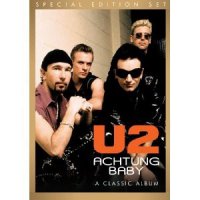 At the dawn of the 1990s, tensions in the U2 camp were fraught. The band argued and fought about the direction they should take for their next project, having received some harsh criticism for the backward looking Rattle & Hum a couple of years before. Bono & Edge were keen to tap into Alternative Dance Music and European Industrial Landscapes while Messrs Mullen and Clayton wanted to continue with the sound that had assured their success for more than a decade already. When solutions were not readily forthcoming, the band even considered splitting up.

But a communal belief in the power of the group to overcome such obstacles bought U2 back from this lowest of ebbs and the result of these discrepancies - tied to a renewed vigour and the enormous talent that had been there since day one - allowed U2 to offer up the strongest statement they had made to date. Changing their sound drastically as well as changing the entire musical background in witch they existed - it may be unfashionable to suggest now, but without this piotal album laying a fair bit of groundwork fpr alternative music generally, it would be doubtful if the likes of Radiohead and Coldplay would have achieved quite so much - U2 had triumphed.

Recognised today as one of the greatest rock albums ever produced, the first film in this two disc set looks back at the development, production, reception and aftermath of Achtung Baby and feartures interviews with the band and those closest to them, plus rare archive, live and studio footage of both the album´s production and the subsequent Zoo TV tour, plus a host of other feature making this program the finest document yet to chart the album that saved U2 from extinction.

But this, most classic of albums did nothing if not pave the way for what came in its wake, and disc two in the set covers the post-Achtung era - follow up projects Passengers and Pop, as well as their arrival in the second millennium when, as Bono put it so succinctly, they were ´re-applying for the job of best band in teh world', a position that they succeeded in achieving without any fear of true competition.

Over three hours in length across two discs, completed in fold-out digi-style packaging, ths visual celebration of 20 years of Achtung Baby will remain the ultimate tribute to a modern classic.

THIS DVD PACKAGE RELEIES ON INDEPENDENT CRITICAL OPTION AND REQUIRES INDEPENDENT EDITORIAL CONTROL. THIS SET IS NOT SANCTIONED BY U2 OR ANY OF THEIR REPRESENTANTS.