The Beatles in 100 Objects Hot 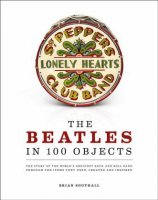 The story of the worlds greatest Rock & Roll Band through the items they used, created and inspired. Englische Orginalausgabe.
That guitar is OK, but you ll never make a living with it.
-John Lennon s aunt, Mimi

This is the fascinating story of the biggest band the world has ever known, told through the objects that were owned, used and inspired by John, Paul, George and Ringo: George s handpainted guitar Rocky; John Lennon s Rolls Royce; Paul McCartney s handwritten recording notes for Hey Jude ; the ash tray from Abbey Road that Ringo used at his drum kit; and many more iconic items from throughout the decade that the Beatles were together.
Rare posters, unique items of clothing, tickets to the oldest concerts, instruments played by them on the road and in the studio and many other personal possessions are included in the 100 objects that together tell you the story of the Beatles as never before.