Interviews Bands u. Musiker FATBOY: 'The undisputed belief in the greatness of tomorrow'

FATBOY: 'The undisputed belief in the greatness of tomorrow' Hot 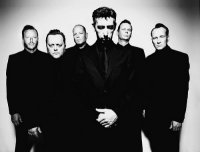 Der Hörspiegel: Hello there! How are you?

Fatboy: Thanks, doing just fine in the Swedish summer heat, getting prepared for the summer tour.

Der Hörspiegel: Your latest album “Overdrive” was pretty refreshing with its old-style fifties sound. What do you think about recent radio music?

Fatboy: Public Radio is boringly mainstream – playing the same songs over and over. Even a good song gets worn out.

Der Hörspiegel: Which influence do the original rock and rockabilly heroes have on you?

Fatboy: I guess they’re always present in one way or the other. I grew up in a little town in Sweden where Rock n Roll and Rockabilly was the biggest thing so I never stood a chance, looking up to the older boys, see how they dressed and what music they listened to. Attending high school and meeting „normal“ people was a shock.

Der Hörspiegel: Thinking about composing songs, how do you find the right words for the right music? Is there a ritual to get into the mood?

Fatboy: It’s actually just hard work, like a crossword puzzle, being able to fit in the last sentence and making it dance along with the rhythm of the slap bass.

Der Hörspiegel: How hard is it for you to be seen more a musical individual than “one of the bands playing fifties rock music”? Or do you feel flattered being compared to the original Rock’n’Roll recordings?

Fatboy: In Fatboy’s case we are flattered the way we’ve been compared to the 50’s acts because in the same breath we are mentioned as an act finding our own paths down the Rockabilly alley, doing it the Fatboy way. We don’t have any recipe of being successful but one thing we’ve learned is that if you try to please everybody you end up with crap in your hands. Do it your own way. The Fatboy way.


Der Hörspiegel: How do you react when the manager of a recording studio wants to attract you with his latest high end recording techniques?

Fatboy: Can I have the bill, please.

Der Hörspiegel: What thingy should have better survived the fifties but unfortunately didn’t to make today a little bit better?

Fatboy: The undisputed belief in the greatness of tomorrow (man, that’s a title!)

Der Hörspiegel: Last question for today: What would Elvis do?

Fatboy: Well, Elvis anno-56 would have stumbled up to the microphone saying – Flip, Flop and Fly!

Der Hörspiegel: Thank you for taking the time, thank you for an album full of great songs! Yours are the last words.

Fatboy: The pleasure is ours. We are so looking forward coming to Germany in September. See you down the road!